Rhys and I decided a day or two before the December 16th long weekend that we would drive to East London to and back to deliver the Christmas gifts for our fathers and step-moms. Yes, it is a long way but each year our gifts are carefully planned and handmade so the South African postal service is just not an option and couriers are way too expensive. So two days and two thousand kilometres it was to be…

It was up early on Friday morning and with a flask of coffee and a tub of biscuits (yes I made them) for a long drive on very busy roads. We arrived at supper time to a warm welcome and it was a surprise as Rhys’ father did not know we were coming.

I had taken along my Quadbox because I wanted to show my dad because I am really proud of the project. Sharing it with Rhys’ dad steered the conversation along to the 2012 Vardo project. He was quiet for a second and then asked Wendy, Rhys’ step-mom for the photo albums. He then told us about a photo he had with Rhys at about 5 years old sitting on the porch of a vardo with friends and cousins. Of course we had to see the photo. That is Rhys seated on the right.

The photo had been taken at a carriage museum outside of East London and with a bit of internet browsing, we had all the details and times and it mentioned in the write-up that the vardo was still there.  Naturally we were off to the museum on Saturday morning notebook and camera in hand.

Just thirteen kilometres north of East London on the N6 road to Stutterheim is the Calgary Transport Museum. It is open daily from 9am to 4pm and only closed on Good Friday and Christmas Day. The curator is Mr Perks and is very knowledgeable about all the vehicles, their uses, quirks, histories and stories, and he showed a huge love for the collection. It is amazing how many innovations from so long ago are sold as features in our modern motor cars including boots, cubby holes, folding or adjustable seats and some that even swivel around.

The museum holds the private collection of the late Robin G Wells and includes, carts, wagons, trolleys, handcarts, a large wheelwrights’ workshop and forge and of course the vardo. All the vehicles acquired by Robin and his wife Cynthia originate in the Eastern Cape except for two which are from Kimberley. Two of the vehicles in the collection were hand built by Robin, one is a governess cart and the other is the vardo.

Robin and Cynthia travelled to England in the early 1970’s and during their trip, they visited the Dunton yard in Reading and purchased a set of original plans for the Dunton ledge. Robin started construction in 1978 finishing in 1982. Mr Perks opened the barn doors to the vardo and we were shocked to silence at the sheer size and beauty.

Cynthia did all the carving and painting by hand. Sadly, she did not finish and the two rear decorative carved porch brackets are unfinished but have been put in place on the vardo by Mr Perks to display the amount of work that goes into such a build. The signs posted next to the vardo read as follows: Keir-Vardo As called by the Gypsies their waggon-house. This is a replica of a ‘ledge’ built by Dunton’s of Reading. The interior and exterior is as the original but no two were ever the same each being built, painted & carved to order. The ledge one of six main types of travelling vans and one of the most favoured by the Romany. This one was started in November 1978 and with the exception of springs axels & rear wheels everything has been made at Calgary. It has been a family effort, there are over 300 items of carving. These vans were never built by gypsys who later were adept at restoration.

To see this vardo in full scale was one of life’s WOW experiences. I don’t think that there is any other way to describe it. We took hundreds of photos and will post many more on our website for your enjoyment. 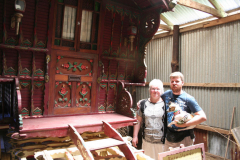 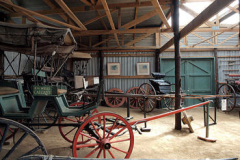 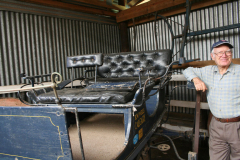 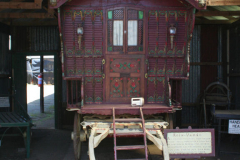 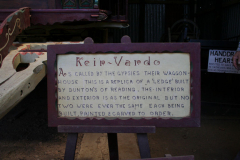 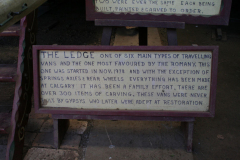 What a treat this surprise trip was!
Belinda
PS: The Christmas gifts were roomboxes, one per parent themed to show each personality and hobbies. Mr Perks told us about another vardo in Gauteng so the hunt now begins to locate and visit it…..